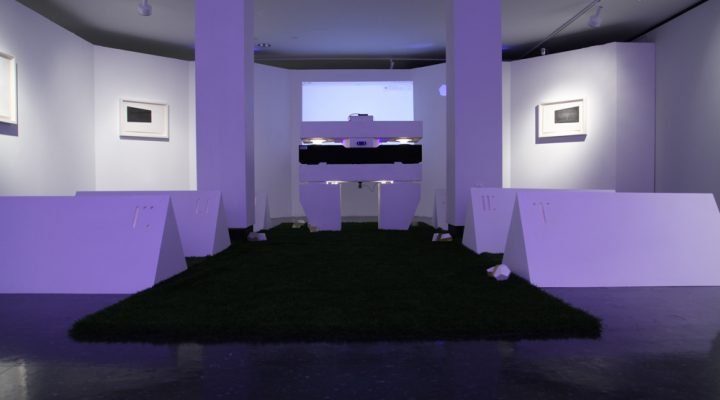 Ryder Richards’ installation, The Idyll, is a hybrid between a pulpit and science fiction control station: a modernist temple to information complete with security cameras, recessed lighting, digital projections, and panels of quasi-unintelligible text and formulas. Upon entering the exhibition the participant can be documented, image projected, and stripped of identity markers conforming to a Universalist ideal: a dissipation of “self” into simplified aesthetic phenomena. Reacting to Walter Benjamin’s notion of the detached image of cinema living a more rich, travelled, and complex life than the actor, Ryder hopes to thwart this aggrandizement of “self image” in a more Eastern sensibility: dissolution of self to merge with the whole, a sacrifice of identity for communality.

At the center of “The Idyll” is a doubt or skepticism about just what the cool, abstract forms of geometric modernism communicate. Does a belief in their power amount to a new kind of religious awe?

References: The exhibit draws from several sources such as Bourriaud’s The Radicant,  Boris Groys art essays, UFO theory (Flynn, Vallee), 1950’s science fiction and red scare tactics (Heinlien), the Compton Effect and apocalyptic doomsday prep psychology and electronic surveillance (Zizek, McCarthy, and several others), and the elitist alienation and obfuscation inherent to Utopian theory (Moore, Corbusier, and architectural theory). The title is from a Maurice Blanchot short story about a stranger’s inability to “escape the spectacle of happiness” and his subsequent death.